The kuttyPy (/kʊtipʌɪ/) Microcontroller training utility allows real-time manipulation of the registers in microcontrollers via a connected computer containing its python library. setReg and getReg function calls act as a real-time debugging and monitoring utility, and combined with Python's visualization and analytical utilities, this approach has immense pedagogical potential for beginners.

The kuttyPy Plus hardware is an ATMEGA32 microcontroller development board developed by the ExpEYES project, and is currently supported by this software. It contains the kuttyPy firmware, but can also be used to run other programs via its bootloader.

ATMEGA32 training board for beginners

Active monitoring and control of each microcontroller pin. No compile+upload required

Monitoring utilities built into the bootloader. Compatible with Arduino IDE

Upload your own compiled C code and use as a serial monitor! 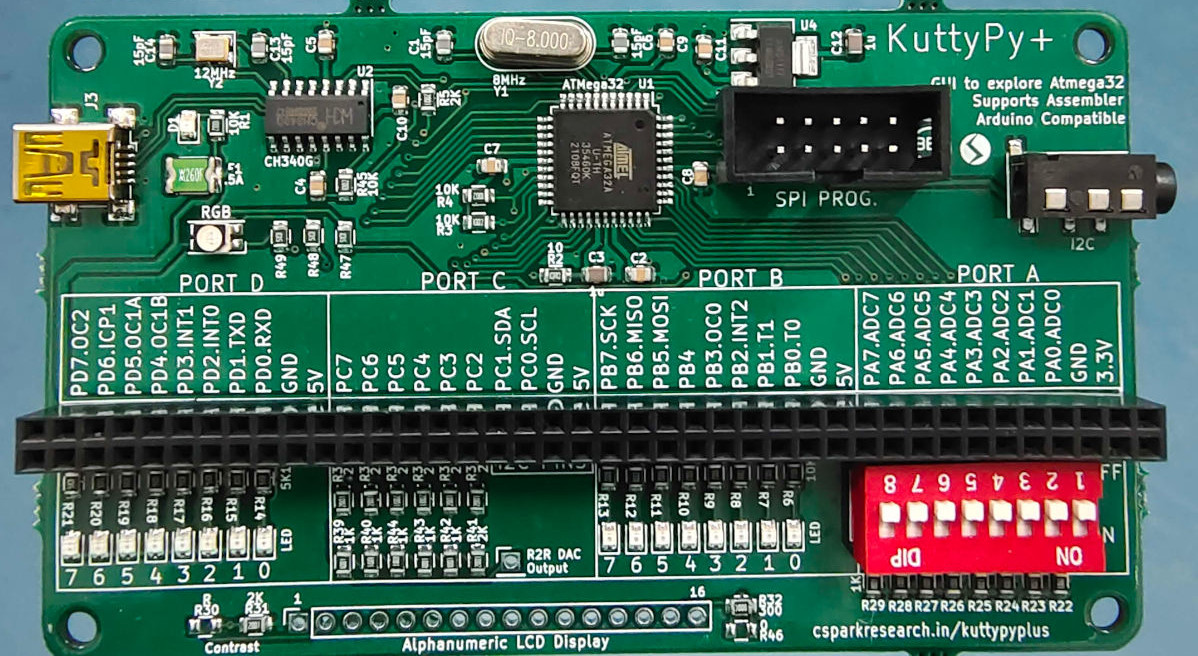 Use it as a monitoring utility for your projects

Differential inputs with up to 200x gain

Control via the Python Library

Monitor your Python code’s activity while it executes

Select any register for reading/writing

Set up Read/Write sequences and test response without compile/upload

Check out the ADC read sequence on the write.

In this demo, the ADC is read by first setting the bits in the ADCSRA(control and status register), then reading back ADCL(8LSB)+ADCH(2MSB), and also checking the new status of ADCSRA after the operation.

Harness the power of Python

Use the KuttyPy as a data acquisition board

Combine with powerful Python modules for data analysis and visualization

In this demo, the ADC is read continuously and values are plotted using matplotlib

Plug and Play a range of I/O accessories

A hall sensor is being tested using the ADC. On the right, is a servo motor being controlled via the PWM output.

Plug and play. No coding required

View data on analog gauges or the data logger

Control I2C devices such as DACs ( shown in the video )

The KuttyPy monitor code is part of the bootloader.

This allows users to upload their own Hex files without losing the training utility features.

The user can switch back to the monitoring utility in a snap!

In the animation, after fiddling a little with the PWM controls on the monitor, the 'user app' button is clicked. This triggers the following -> Within a few ten milliseconds the user uploaded hex file starts executing. The console turns into a serial monitor, and shows any text sent by the user uploaded hex.

Lots of example C code is shipped with the software

To stepper motor control, and persistence of vision displays.

A persistence of vision display made with C code! Write text in thin air using 8 LEDs on PORTB.

Connect the hardware, and import the library. Import will throw an error if the hardware is not detected