For Windows you Might also require Windows Visual C++ Redistributable

An all-in-one Test and Measurement tool

A Powerful tool for learning science by exploring and experimenting.

SEELab 3.0 is the upgrade to ExpEYES17. It features a 40 pin connector, with an integrated breadboard slot for ease of use. External sensors can be connected via a single AUX cable.

Download the fully loaded SEELab 3 app from the Play Store to use your device as a portable test and measurement tool. It includes a host of features ranging from the Oscilloscope and Data loggers , to a Graphical programming interface, and interactive schematics.

Create circuit diagrams in Inkscape/PS and save as plain SVG

Open with the SEELab3 Android app, and watch dynamic content being generated

Text such as PV1, WG, A1 are replaced with controls, and meters. Intuitive User Interface.

Derived parameters can also be input as equations !

On the right is a schematic diagram for a diode clamping circuit.

This feature is under active development, and 30+ electronics schematics have already been added to the app.

Scanning Radar with a Servo Motor and the VL53L0X

seel3/android/
VL53L0X is an easily available optical ranging module with an effective range of around 1 meter. This is mounted on a servo motor, and a small code snippet measures the distance to the neasrest obstacles at different angles. This data is then plotted in a polar plot with Blockly.
June 23, 2022

Object Tracking With Opencv and Blockly

seel3/android/
HY-SR04 is a widely available ultrasound ranging module. It consists of two 40 kHz Piezo crystals, one acts as a transmitter and other as a receiver, and some electronics circuitry to measure the time interval between a burst of sound transmitted and the echo received.
June 23, 2022

seel3/android/
The visual programming blocks include several blocks which use the capture routines. You can use them to create a custom oscilloscope interface
June 23, 2022

seel3/android/
VL53L0X is an easily available optical ranging module with an effective range of around 1 meter. Using the VL53L0X as an example, this post will demonstrate how to add a sensor to the android library so that it is automatically detected by the interactive schematics.
June 23, 2022

seel3/mechanics/
HY-SR04 is a widely available ultrasound ranging module. It consists of two 40 kHz Piezo crystals, where one acts as a transmitter and other as a receiver, and some electronics circuitry is inbuilt to measure the time interval between a burst of sound transmitted and the echo received. This module can measure distance with around 3mm Accuracy, and can be applied to study mass-spring systems, pendulums, and other similar mechanical systems.
July 08, 2019

seel3/android/
Circuit diagrams can be boring sometimes, and ExpEYES has tried to make them more appealing by making them dynamic and interactive. As can be seen from the cover image, this means that voltmeters in the schematic show values in real-time, the function generators can be dynamically adjusted , and derived parameters such as currents are also calculated and updated continuously.
June 23, 2019

seel3/
The AD9833 is a Direct Digital Synthesizer capable of sine and triangle wave generation up to 2MHz with 24bit resolution. It can be used with expeyes-19
February 09, 2019

Some featured examples that let you create your own programs without writing lines of code. For advanced users, the generated code in either javascript or Python can be modified in a separate editor.

Separating DC from an AC signal

Resistance of the Body

The SEELab3 is fully compatible with the ExpEYES17 desktop software which recognises it based on the version number stored in the hardware. Some of the ExpEYES17 experiments are listed below, and can be carried out with the SEELab3 as well 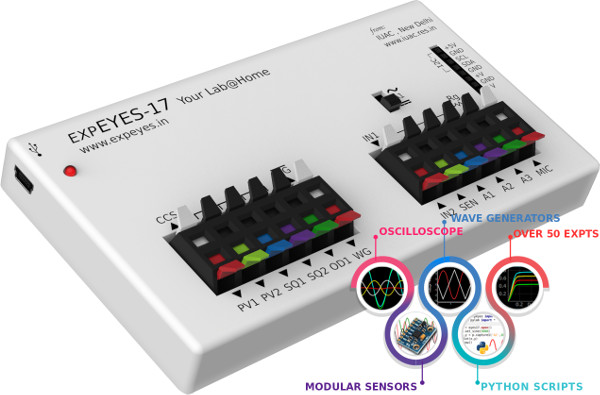 The functions of the output connector block (left side) are briefly explained below. All the black coloured terminals are at ground potential, and all other voltages are measured with respect to it.
All Experiments

The functions of the input connector block (right side) are briefly explained .
Your Lab @ Home! 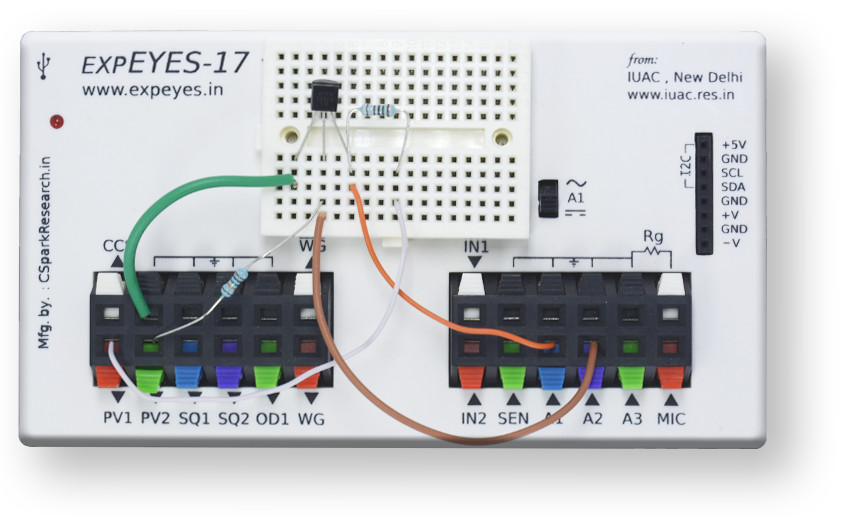 Output characteristics of an NPN transistor are being obtained in this experiment. The collector voltage is swept using the programmable voltage output, PV1, and a series 1K resistor is used to limit the current as well as to act as a shunt to measure the voltage drop across the transistor’s C & E. Base current is set via another source, PV2, and a 100k resistor. Collector and base voltages are monitored using analog inputs A1 & A2. 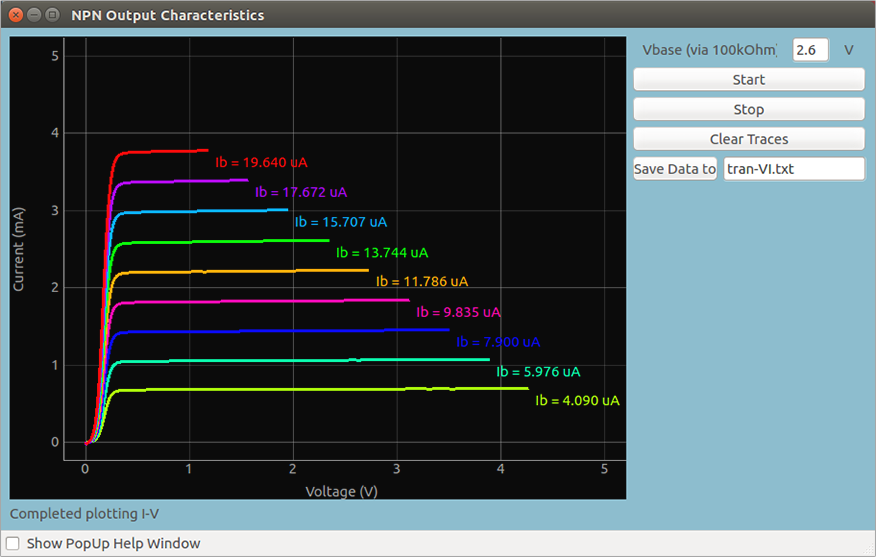 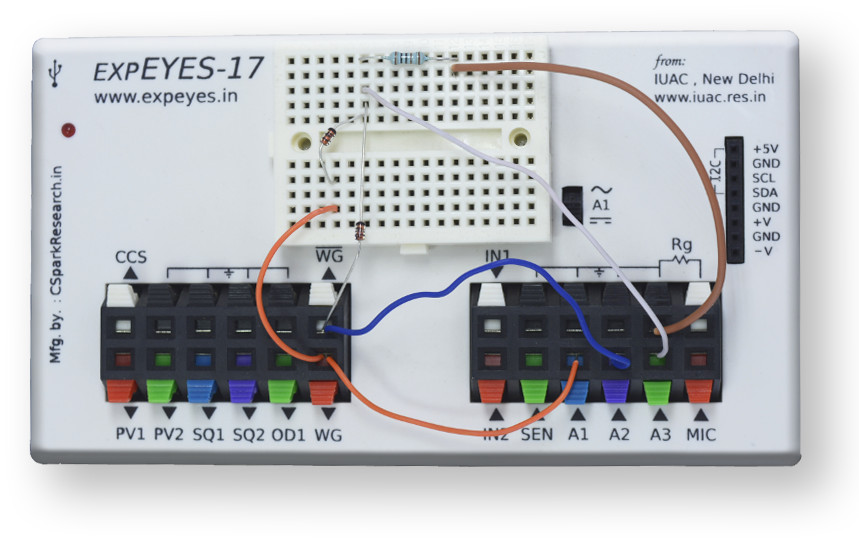 180 degree out of phase AC voltages required for the full wave rectifier are provided by WG and WG outputs. The input waveforms are monitored on A1 and A2, and the output on A3. A load resistor must be connected from A3 to ground to obtain proper output waveforms. A capacitor can be connected in parallel to the load resistor to observe the effect of filtering. 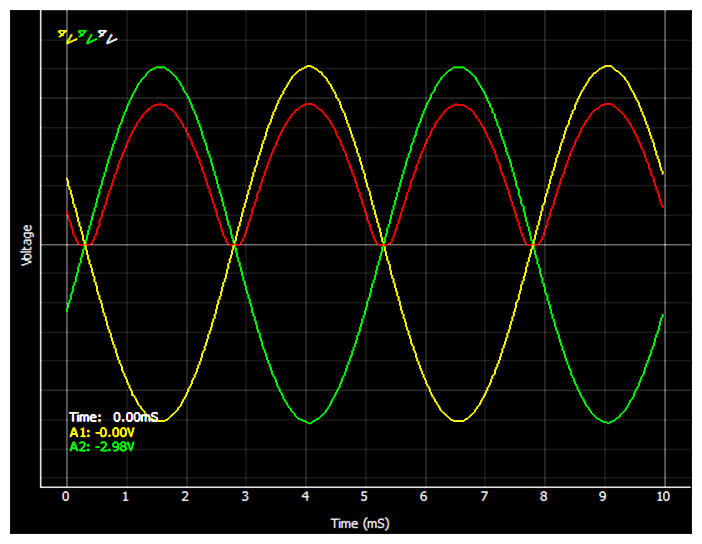 The SEELab hardware can be accessed via the expeyes Python library, which provides functions for operations like reading/setting voltages, measuring capacitance, time intervals etc. The example code is to study an inverting amplifier. A 200 Hz sine wave is set on WG. The channels A1 and A2 are captured and plotted, using matplotlib. Data analysis will reveal the exact gain. 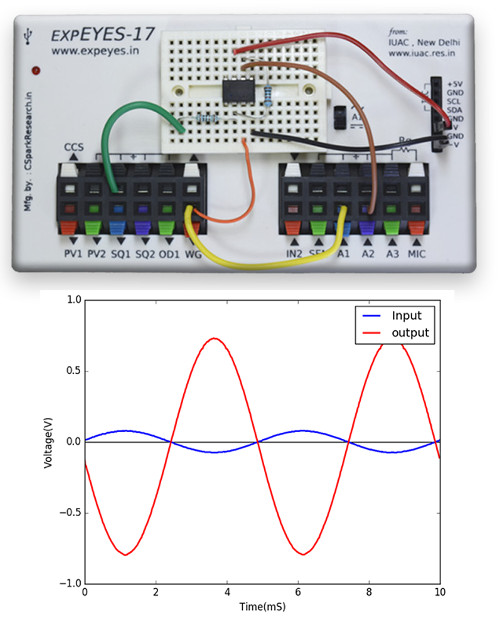